After another amazing breakfast (which I won't mention on any other days because it's bound to be as good every day!) the day starts with an Evaluation Training workshop which consists of 3 members of the PADI Staff giving Knowledge Development Presentations for us candidates to mark. All in all the PADI guys did pretty well although I didn't always agree with the scores the PADI guys gave their colleagues - far too lenient but they're the scores we had to match!!

Next came a presentation on how to Counsel Instructor Candidates - saying you're kidding is that the best you can do was way down on the list of suggestions - better change my ways then!! This presentation was really helpful and gave a lot of new ideas on the best ways to give feedback to candidates without hurting their feelings too much and working out if there was a reason they messed up if they had been great so far. 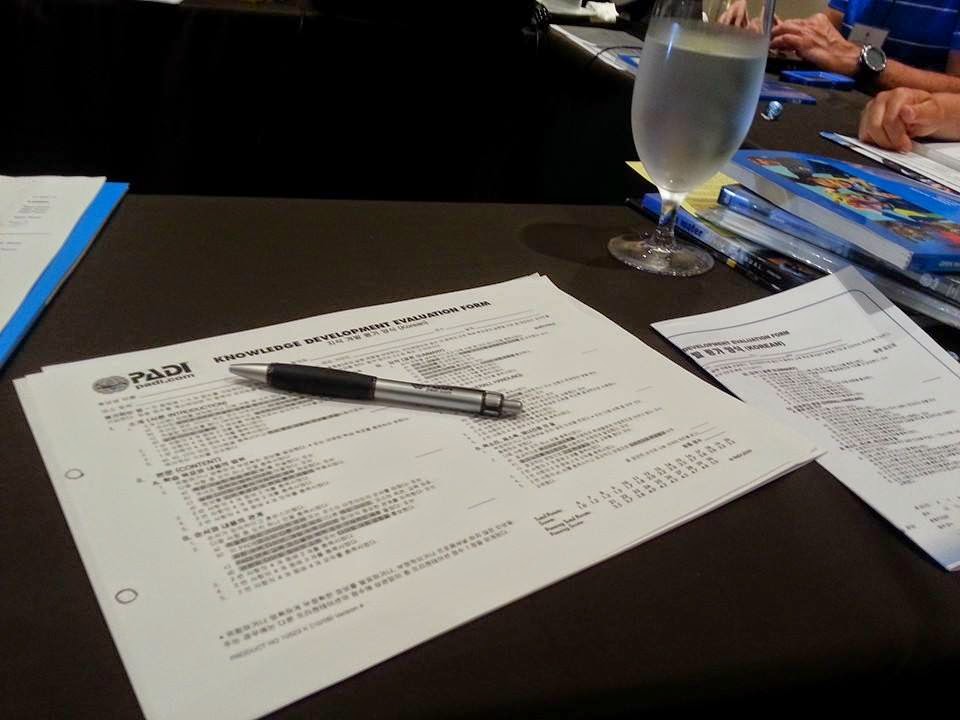 We did a bit of role playing which was quite funny: I played a candidate who happened to be a very well known and respected professor who had just waffled my way through a presentation without actually telling the students what they needed to hear. I also happened to be very good friends with the people who would decide on a contract the Course Director had applied for so the phrases " Do you know who I am?", "I've been a professor for many years, I do know how to teach" and "Don't be silly of course I told them what they needed to know, and a lot more besides" had to be handled very delicately by Chuck who was playing at Course Director (we're only playing for one more week!!). He did a great job.

When it was my turn to play CD, Chuck pretended to be a very experienced IDC Staff Instructor that taught me my Open Water Course many years ago and was a role model for me as I progressed and was now staffing on one of my IDC's. Unfortunately I had just given a candidate a low score because Chuck had told him that the way I had demonstrated a skill was right but there was a better way to do it which is how they do it "in the real world" (sound familiar anybody?). The candidate performed a skill the way Chuck had shown him but unfortunately had broken standards so the candidate failed because he listened to Chuck. My feedback to Chuck was full of praise for his experience and guidance followed by a reminder that as good PADI Pro's we always do things according to PADI Standards even if we do believe there is a better way - PADI would have been proud. I ended the feedback with a suggestion that he swiftly hangs up his wetsuit and takes up golf!!

After lunch we jumped on a coach to a Confined Open Water site which was a fantastic lagoon on a private beach on a private housing estate where each house is about 1 mile away from the next. Julio Englasias and Oscar De La Renta have houses there but unfortunately weren't around today to join us. The lagoon is separated from the sea by a big, rocky wall and is perfect for playing at being Open Water students. Two PADI staff members gave Confined Open Water presentations for us to score and then compare our scores with their's - happy with how that went.

A quick skill circuit to finish all of the skills we need to perform went very well for everybody in the Green Team apart from a slight mishap for poor Chuck who had left one of his weight pouches on the beach. As soon as Chuck went into the hover position his lack of sufficient weight spun him completely upside down and he proceeded to do a perfect hover with his fins where his head should have been and vice versa. He stayed like this until the examiner told him to stop but he admitted afterwards that he was actually stuck and couldn't turn himself upright. We all felt very guilty for laughing at poor Chuck's unintentional somersault but he nailed it once he got his weights right though.
Posted by Unknown at 4:59 AM

Thank you for commenting on our Blog. We will review your comment and decide if we are happy to post it on our Blog.
Regards
The Dive Academy