The Dive Academy's latest IDC has finished and both of our candidates successfully completed the PADI Instructor Exam on Koh Tao and are now PADI Instructors.

It is always nice to see the hard work and effort that candidates put in during the IDC rewarded by passing the IE and in the case of our latest candidates, Beth and Luca, it is even more satisfying due to the fact that they both had to work even harder than most candidates. 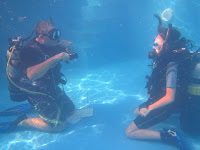 Beth completed a Divemaster Internship with an SSI dive centre in Australia which meant that she would get the course for free in exchange for working once she was certified. As it would benefit the dive centre to get Beth working as soon as possible her training was rushed and massively incomplete which left her lacking the skills and knowledge that a properly trained Divemaster would have and meant that she was completely unprepared for what she had to face during the IDC. 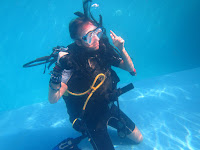 We originally began Beth's IDC in November but after struggling through the first week she decided to delay the rest of the IDC so she could go away and prepare herself properly - which was completely the right decision. For the next 3-4 weeks she watched skills videos on YouTube, practised in the swimming pool, studied the theory, asked lots of questions and took many practise exams until she was ready to join the January IDC. When she came back, Beth was like a completely different person to the one that first joined our IDC and she was completely prepared for what she had to do and achieved really high scores on every part of the IDC. Her 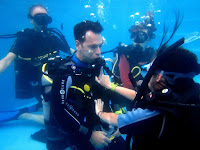 extremely hard work and effort had paid off and along with the frequent reassurance from Course Director Paul and Staff Instructor Claire to calm her nerves and boost her very fragile confidence she was more than ready to take the PADI IE.

Luca was previously a PADI Instructor in the early 90's but had been inactive for around 15 years so had to be retrained in more up to date ways diving is taught along with new skills as well as completely refreshing his existing skills and knowledge. Luca also had the challenge of only speaking very basic English so he spent

the month before the IDC taking English lessons to improve his English enough to be able to take the IDC with us and in particular with our Course Director Paul.

Again, with lots of effort, hard work and a little bit of patience (actually quite a lot) on the part of both Luca and Paul, Luca finally got himself into a position where he was ready to take the IE, which he did in Italian which obviously helped.

The Instructor Exam was held on Koh Tao and as usual we based ourselves at Bans Diving Resort. Bans always help us with logistics providing tanks, weights and transportation as well as allowing us to join with their candidates at the IE party and celebrations. For those that don't know Bans are the biggest PADI Dive Centre in the world but their staff, particularly their CD's, are always more than willing to help us when we go over for the IE - help that is greatly appreciated and something that they do with nothing in it for themselves other than just to be nice and helpful.

On day one, the IE orientation started at 7.30am followed by the Standards and theory exams which both Beth and Luca comfortably passed with no concerns. During lunch they prepared their confined water presentations which they gave in the afternoon and again were successful with no problems. 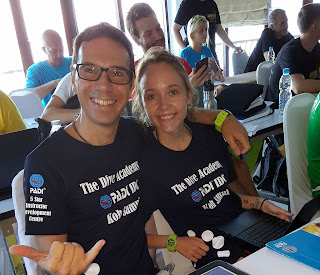 Relaxing  before the exams!! 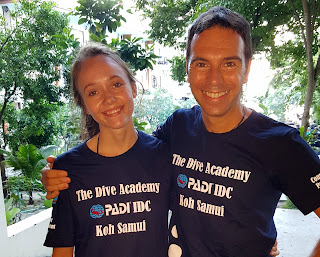 The second day began in the classroom with the Knowledge Development presentations and after preparing thoroughly the previous evening, again there were no scares as both got high scores. The final portion of the exam was the Open Water presentations and with just under 50 candidates on the huge Bans boat it was going to be a fairly long wait until the end. Fortunately Beth and Luca were in one of the first groups to go down which meant they could get their presentations out of the way then come back to the boat where Paul was waiting and relax and prepare for their final debriefings. Again, as expected, both performed really well and got high scores to complete the IE and become PADI INSTRUCTORS!! 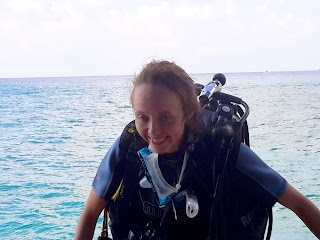 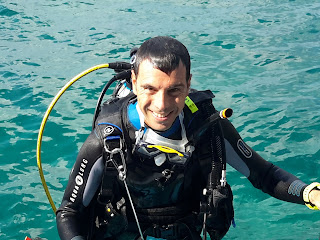 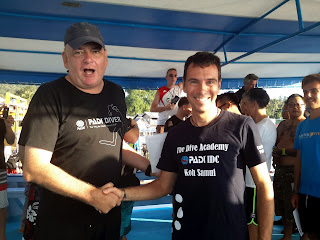 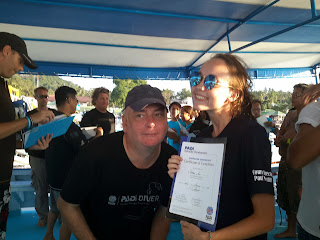 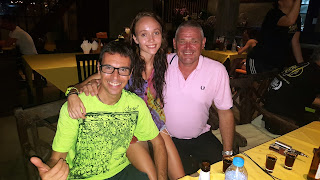 The happy new Instructors with their proud Course Director 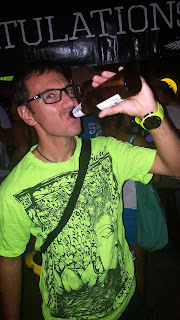 Luca enjoying his first alcoholic drink in 6 months, soon to be followed by a shot of Sambuca!!

Congratulations to the two of you and well done for all the hard work you put in to get you where you wanted to be. We hope you enjoy Living The Dream.......

If you want to know more about what it takes to become a PADI Instructor contact us for information.
Posted by Unknown at 8:12 PM No comments: